FREEDOM: The End Of The Human Condition — ‘the book that saves the world’, as former President of the Canadian Psychiatric Association, Professor Harry Prosen, described it — was launched internationally in London on 2 June 2016 at the Royal Geographical Society (RGS).

Tim Macartney-Snape (AM OAM), Patron of the World Transformation Movement and world-renowned mountaineer, introduced biologist and author Jeremy Griffith and humanitarian Sir Bob Geldof (FRGS), who gave the keynote address. In his introduction, Tim said that “Sir Bob will speak first about the crisis facing the world after which Jeremy will present the solution to that crisis.” 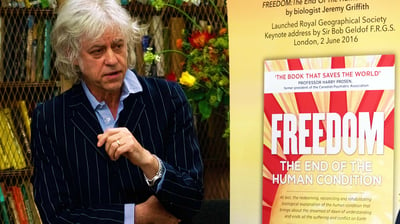 Most excitingly — and appropriately because he is regarded as the conscience of the world and someone whose concern for humanity is second to none — Sir Bob then gave his address, which wonderfully encapsulated this concern about the crisis faced by the world as well as his appreciation of where the answers to the problems must come: “I’ve never felt the world more threatening, more fractious, more fissiparous, more febrile, more fucked up than it is now…We need to think, we need new ideas, we need proselytisers, we need obsessed people, which I think Jeremy is. We need him to be questioned. We need FREEDOM to be argued, we need it to be read and talked about and understood…you need someone as committed as Jeremy to trying to understand what gets us here…Never before have we needed genius, magic and power more; and the word I’d add to that is thought and thinking…Jeremy made me think afresh and think differently. I hope he does it with you.” London’s RGS was the most appropriate venue in the world to hold this momentous event because it is where the late Sir Laurens van der Post — the most quoted author in FREEDOM and the inspiration in Jeremy’s life — made his impassioned plea for the explorers of the world to investigate the inner realm of the human condition, a plea that Tim Macartney-Snape played for the audience in his introduction. In his 1990 RGS Television Lecture of the Year, Sir Laurens said, “It’s been said that the explorers in mankind must be singularly unemployed because there’s nothing left in this world to explore. Well of course that depends on what you mean by exploration…in the sense to which exploration is both an exploration into the physical and into the spirit of man there is a lot ahead to do…the future is in your keeping…there is exploration in reverse to do. We must go sharply into reverse…we must rehabilitate ourselves; get our old natural selves to join with our other conscious, wilful, rational, scientific selves…Your job is not over.”

It is precisely this reverse exploration into the human condition that Jeremy, with FREEDOM: The End Of The Human Condition, his summa masterpiece, has successfully navigated.

So as these extraordinary presentations demonstrate, we had the right people and the right venue to launch FREEDOM — what an historic day for the human race!

READ Jeremy’s expanded address, which is presented in the booklet, Transform Your Life And Save The World.